It seems we only got about 2 months of winter this year… January and February were cold and snowy, just like they should be, but now it’s warm again. It’s been above freezing for over a week, and most of the snow has turned to slush and ice again. This is just wrong. :( 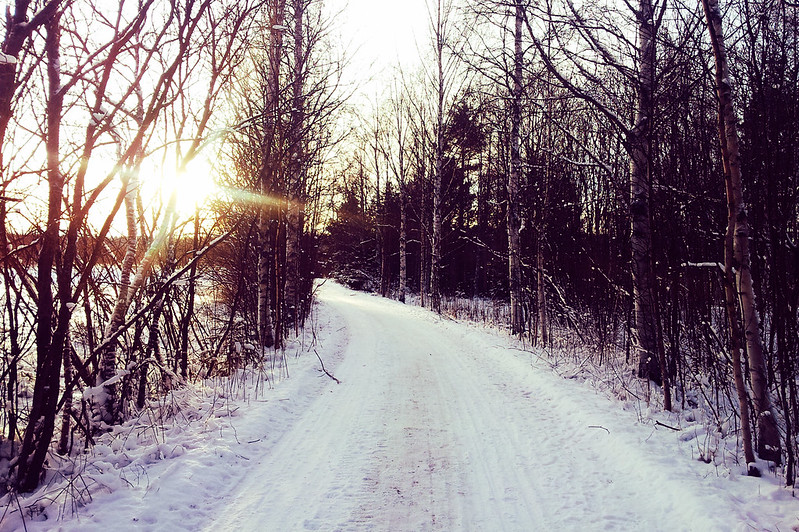 Took this a few weeks ago, on one of the few nice days this winter.

I know I talk about the weather a lot, but I’m afraid you’ll have to live with it. Thing is, the weather isn’t just smalltalk to me, it’s actually really important.
First thing in the morning, after putting on my glasses, I look out the window to check what mother nature is serving today. Partially because the climate dictates what clothes I can wear, which roads will be safe or unsafe to drive, and which paths in the forest will be walkable, but also because it’s important to me to feel connected to nature and the changing of the seasons.

My mum is an urban soul who dream about life in a big city, but my father and my grandparents are/were outdoorsy people who made sure I was taught to love and respect nature.
One of my earliest memories of life is of me in a small sledge that my dad, on skis, is pulling behind him through a wintry landscape. As a child, every weekend and every holiday they took me cross-country skiing, fishing, berrypicking, or just simply hiking. We would go out into the forest just to “check up on it” as my grandfather would put it.

Basically, to me, keeping tabs on the state of nature is just as important as reading the newspapers. And if the seasons are off beat it creates a sense of unbalance, and I don’t like it.

I just realised I sound like such a hippie.

I do get mocked about it sometimes. Apparently caring about nature isn’t just a hippie thing, it’s also an “old people” thing. Mum says as long as I don’t start a weather journal and begin writing down the daily temperatures like dad, it’s ok. I’ve promised not to do that until I’m at least 60. :P

Does anyone else care a lot about the weather and the seasons? Or is it just smalltalk to you?