Have you ever seen a golden eagle? 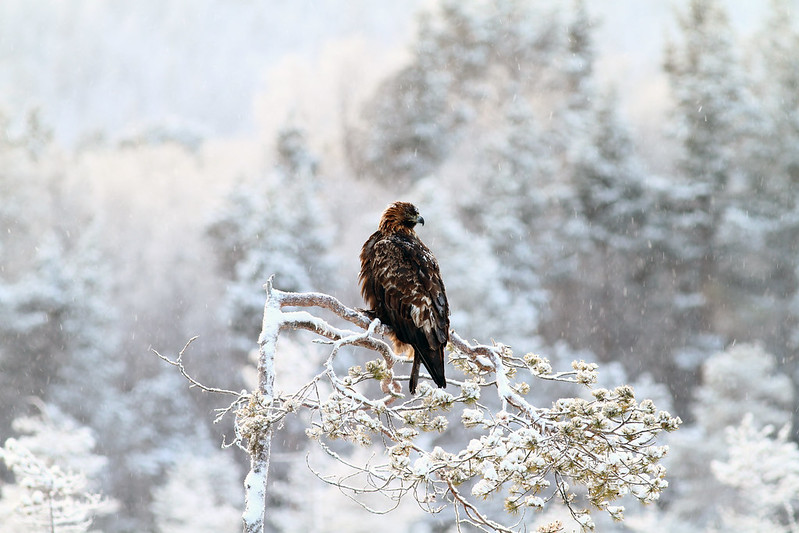 Guys, I have to tell you about my Christmas gift from Markus… He gave me an “eagle safari”!

A professional wildlife photographer (Conny Lundström, his site is in English so check him out) has a cabin set up in a golden eagle territory a few hours inland from where we live, and Markus arranged for him to take us there to observe and photograph the eagles. We got to borrow cameras and objectives too, so we had real professional equipment to play with.

To avoid disturbing the wildlife we had to go out to the cabin before sunrise and stay until dark, which in north Sweden in January means from 7 in the morning to 4 in the afternoon.

Conny had put some fish on a field outside the cabin to attract the eagles, but of course that doesn’t guarantee any of them would show up. I was a little worried that spending the whole day in a cold little cabin might get boring if no animals showed up, but I had no reason to fear. During the day we saw 3 eagles, 2 foxes, half a million ravens, and plenty of smaller birds.

It was a beautiful day too, -20°C (-4°F) and light snowfall. The sun even managed to pierce through the clouds a couple of times. 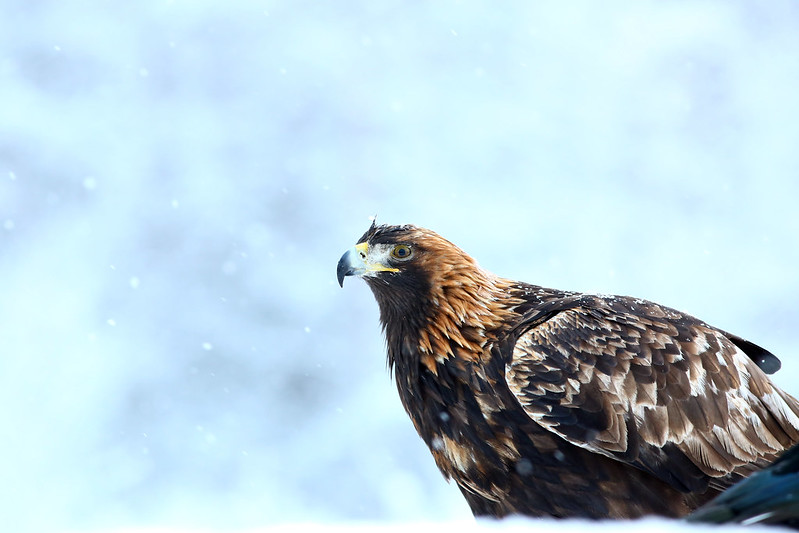 The sky had barely shifted from black to dark blue before the fist eagle landed, and an hour later two others followed.

One of them even landed just outside the cabin! It was only a few meters away, looking through the camera it felt like I could reach out and touch it.

The wingspan was wider than my arms, and the talons were as long as my fingers. You don’t realize how huge golden eagles are until one is sitting so close to you. It was magical. 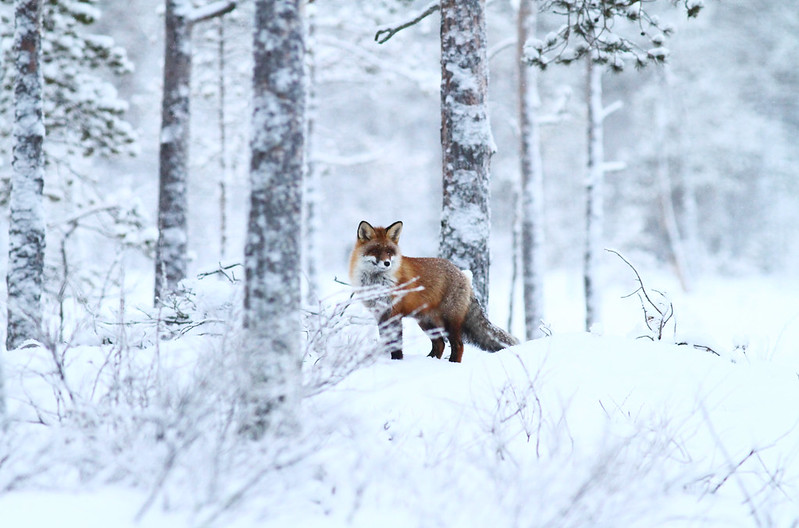 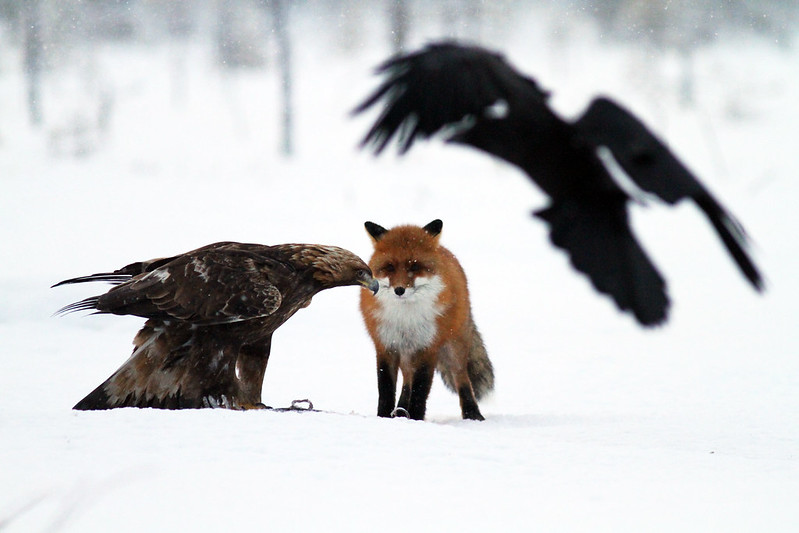 In the middle of the day a fox showed up.
Two foxes actually, but only one was brave enough to approach the fish laid out on the field.

Two eagles were sitting in the trees nearby as the fox approached slowly, carefully… You could tell it was nervous.

The ravens were screaming and flying all over the place, but the fox didn’t pay them any attention. It knew the eagles were the only real danger, but while both of them were watching from the trees none of them showed any sign of coming down.

Miraculously the fox was allowed to come all the way up to the fish. It even had time to eat a couple of mouthfuls until finally, one of the eagles had had enough and suddenly lifted and came right at the fox!

The fox was observant though, and jumped away as the eagle landed in the snow. For a few tense seconds they just stood there, looking at each other, before the fox gathered its senses.

Nothing, not even fresh salmon, is worth facing an eagle for. It backed off and quickly ran back into the forest. It didn’t come back. 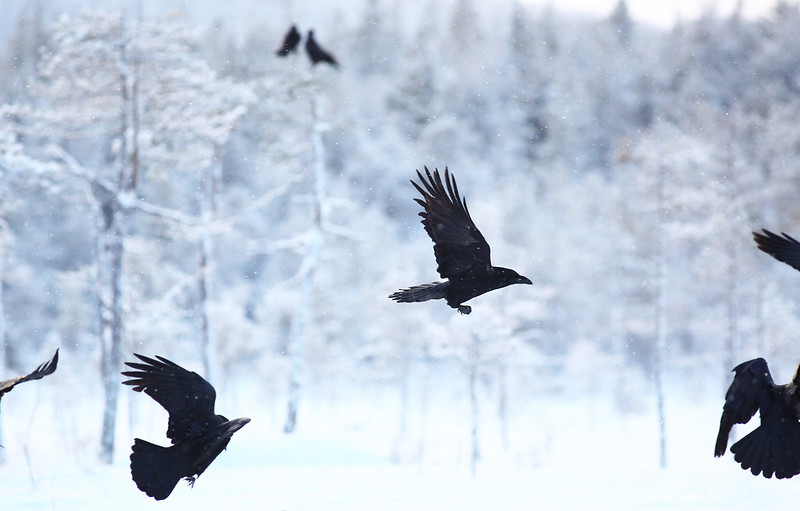 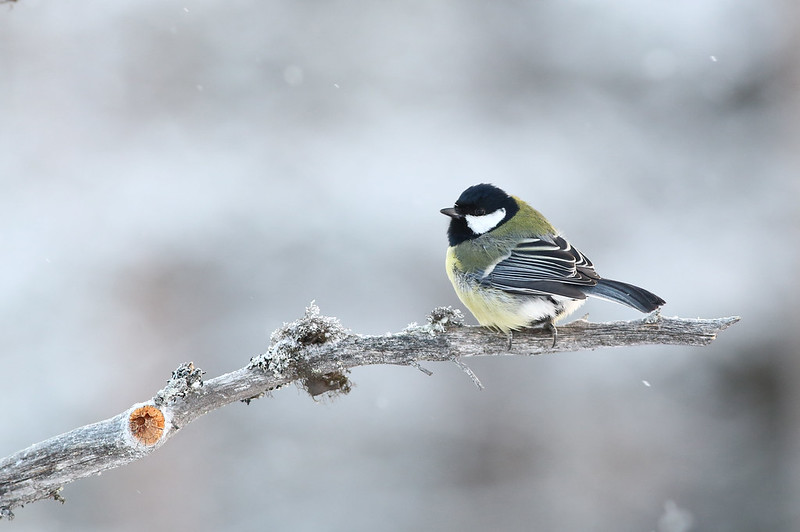 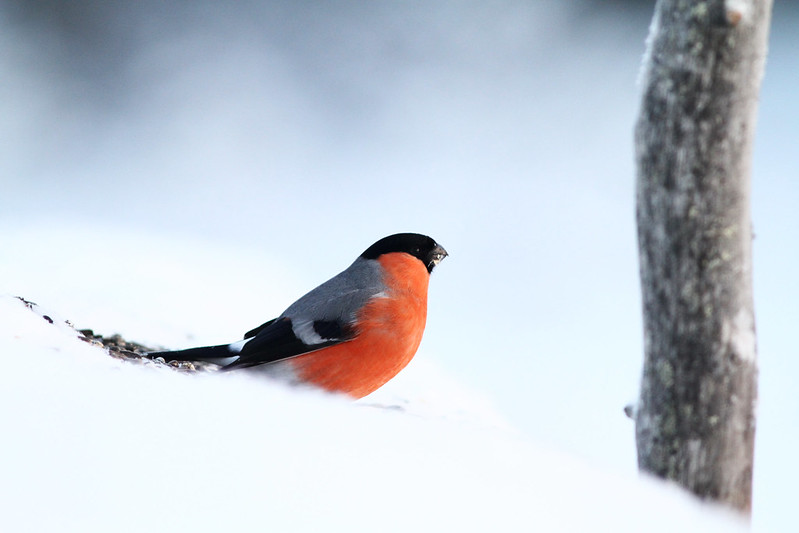 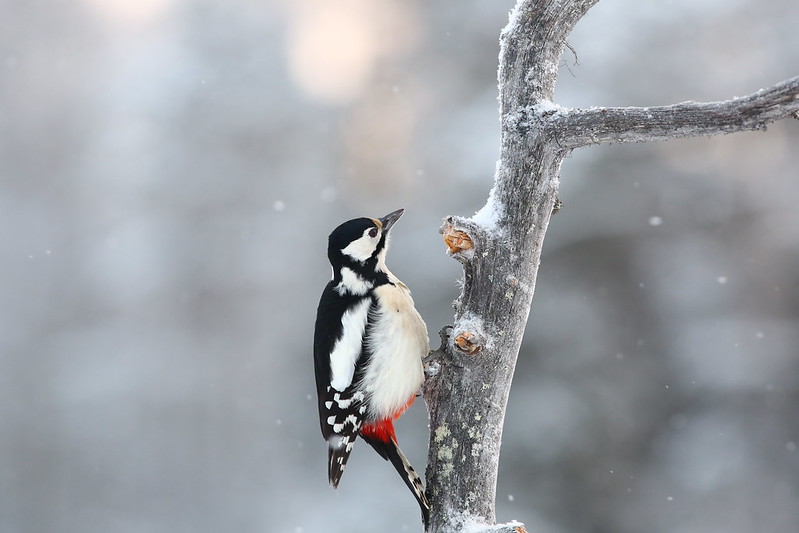 Beside the eagles there were many other birds around that day. Lots of ravens but also magpies, little tits and finches, and even a woodpecker.

I was really happy to get so close to the Eurasian bullfinches, they are some of my favourite birds. The females are a dull reddish brown, but the males have super bright red chests. I think they’re so cute and pretty. :) 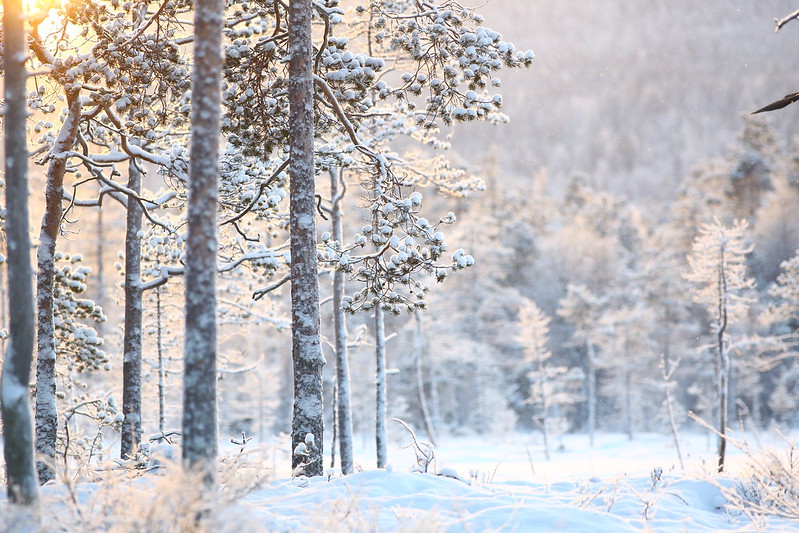 It was a truly great day, and I would definitely do it again. Conny says he knows a great place for watching black grouses during mating season in the spring, and I’d love to go there.

I’m also very tempted to get a real camera and learn more about photography.
I would not have been able to get those headshots of the eagle if I had been using my phone, as I normally do. If I’m going to try and capture the beauty of nature I might as well learn to do it right. ;)