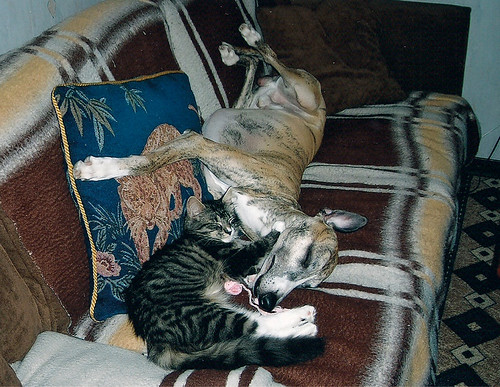 Zappo and my friends cat Zingo

For years me and Markus have been talking about getting a cat. We both grew up with cats and would love to have one again. You know what they say, a home without a cat is just a house ;)
It would be good company for Zaphod too. We had a cat for the first 2 years of his life and he seem to like having another four-legged creature to share the couch with.

We’ve also discussed becoming a foster home to help out the local animal protection association. They are always looking for temporary homes for cats and it would be nice to help out. But it would probably be difficult to have a cat for a little while, get attached to it, and then have to give it to someone else :( It is definitely an alternative though, and we’re thinking about it.
And if we do decide to get a cat we’ve already agreed to adopt one from the animal protection association anyway.

But we still haven’t made a final decision… There are two points to consider first: